First Day of Your Last Period

Couples can significantly increase their chances of conception by having intercourse on or before the day of ovulation. One way to improve the timing is to use an ovulation calculator.

An ovulation calculator estimates the day a woman will ovulate based on the first day of her last menstrual period (LMP). The calculator works by adding cycle length to LMP and then deducting the luteal phase, which is usually defaulted at 14 days, to arrive at a predicted ovulation date.

Important Note: Treat all results from any ovulation calculator as being estimates only. It is recommended that all results are confirmed by extra testing. We hope you enjoy our calculator!

When Am I Most Fertile?

The fertile window: Research shows that most pregnancies are the result of intercourse in the 5 days leading up to ovulation or on the day of ovulation.[2] This period of time is often called the Fertile Window.

Fertile Window:
The fertile window starts 5 days before ovulation and ends on the day of ovulation.

Fertility is especially high 2 days before ovulation and on the day of ovulation.[2] 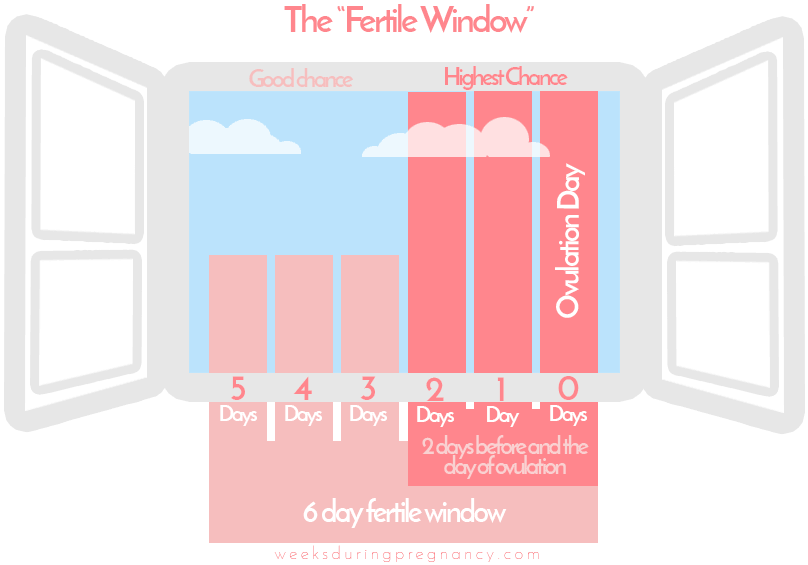 The calculator will show your predicted ovulation date and fertile days.

Couples trying to conceive (TTC), should have intercourse during the woman's fertile window and especially during the 2 days before ovulation and/or on the day of ovulation.

It can also be helpful to focus on days your vaginal mucus is watery and stretchy, like raw egg white.[3]

Knowing your ovulation and fertile dates is helpful but not crucial. If you regularly have intercourse 2 or 3 times a week, probability indicates you will hit the fertile window[2] whether or not you know the details of your cycle.

Not Trying to Conceive

If you do NOT want to become pregnant, remember that almost any day is potentially a fertile day depending on your cycle length and timing of ovulation.[1]

Why you are Fertile Before you Ovulate

When you have intercourse, the sperm released by your partner can survive for several days. If you ovulate in the following hours or days after intercourse, sperm and egg can meet and conception can occur. A sperm remains able to fertilize an egg for approximately five days after being released during intercourse.[2]

Ovulation calculators work by adding the menstrual cycle length to the date the last menstrual period started and then deducting the luteal phase to arrive at a predicted ovulation date.

Why the Ovulation Calculator Deducts the Luteal Phase:

Traditional assumption about the length of the luteal phase:
Since the luteal phase is reasonably constant in length, it is traditional to assume that it is 14 days long and that ovulation therefore takes place 14 days before bleeding starts.

To calculate your ovulation date yourself, use the same formula that the ovulation calculator uses:

Ovulation Calculators can only Estimate Dates

How to Calculate Your Average Menstrual/Ovulation Cycle Length

If you have a record of your previous cycles, count how long each cycle was over the last x amount of months. Add them all together and then divide the total by x to find the average.

Round the result up or down

How to Calculate Your Fertile Window Yourself

How to Calculate Your Luteal Phase

As discussed above, the luteal phase is now known to be quite variable, even in women with consistent 28 day cycles. But it is still reasonable to begin with the assumption that your luteal phase starts 14 days before menstruation, as long as you bear in mind that this may not be the case for you.

If you don't know your ovulation date: Assume your luteal phase is 14 days (default assumption) but know this may not actually be so for you.

If you do know your ovulation date: The luteal phase is the number of days from ovulation to the day before your next menstrual period.

How to Calculate your Follicular Phase

If you don't know your ovulation date: Begin with the first day of your last period (LMP) and add your average cycle length. Then deduct 14 days (average length of the luteal phase). The remaining days are the estimated days of your follicular phase.

If you do know your ovulation date: The follicular phase is the number of days from the first day of your period to the day you ovulate.

How to Know More Accurately When you are Ovulating

We suggest you use the ovulation calculator to find your expected ovulation date and fertile window and then use any of the following methods to help confirm your ovulation date. A combination of more than one indicator is more reliable than any one on its own.

Dates Provided by this Calculator are Only Guidelines